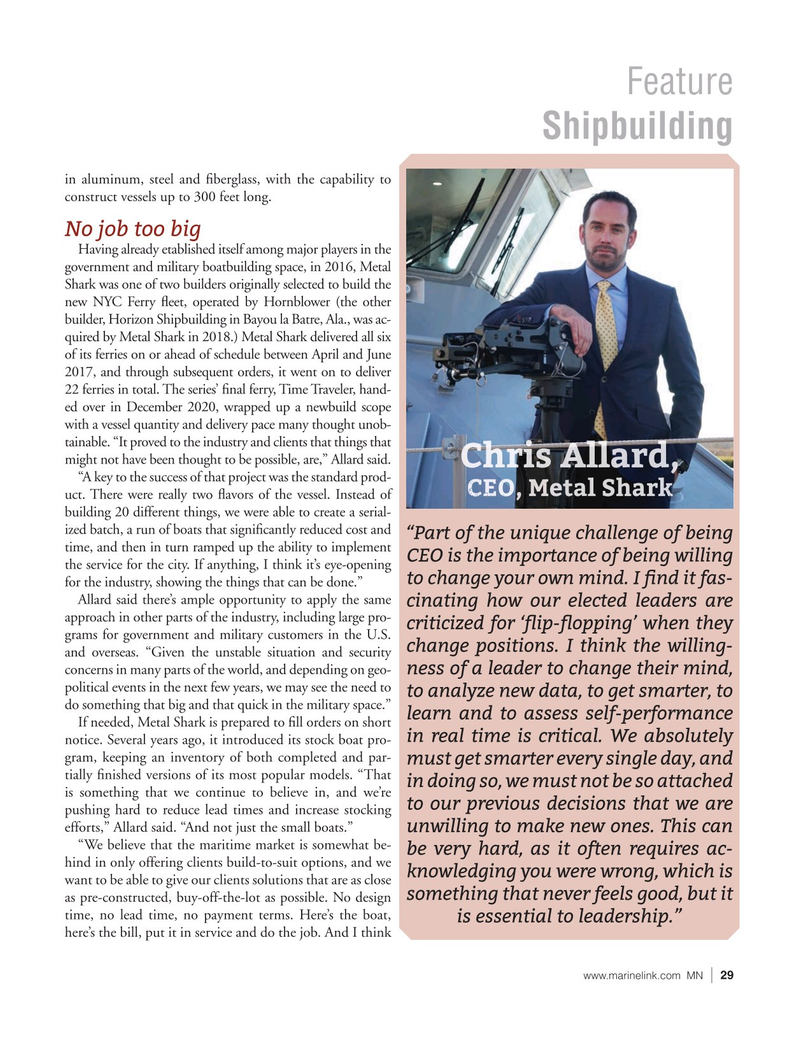 Shipbuilding in aluminum, steel and ? berglass, with the capability to construct vessels up to 300 feet long.

No job too big

Having already etablished itself among major players in the government and military boatbuilding space, in 2016, Metal

Shark was one of two builders originally selected to build the new NYC Ferry ? eet, operated by Hornblower (the other builder, Horizon Shipbuilding in Bayou la Batre, Ala., was ac- quired by Metal Shark in 2018.) Metal Shark delivered all six of its ferries on or ahead of schedule between April and June 2017, and through subsequent orders, it went on to deliver 22 ferries in total. The series’ ? nal ferry, Time Traveler, hand- ed over in December 2020, wrapped up a newbuild scope with a vessel quantity and delivery pace many thought unob- tainable. “It proved to the industry and clients that things that might not have been thought to be possible, are,” Allard said.

C CE EO O, Me et tal Sh hark k k k k k uct. There were really two ? avors of the vessel. Instead of building 20 different things, we were able to create a serial- ized batch, a run of boats that signi? cantly reduced cost and “Part of the unique challenge of being time, and then in turn ramped up the ability to implement

CEO is the importance of being willing the service for the city. If anything, I think it’s eye-opening to change your own mind. I ? nd it fas- for the industry, showing the things that can be done.”

Allard said there’s ample opportunity to apply the same cinating how our elected leaders are approach in other parts of the industry, including large pro- criticized for ‘? ip-? opping’ when they grams for government and military customers in the U.S. change positions. I think the willing- and overseas. “Given the unstable situation and security concerns in many parts of the world, and depending on geo- ness of a leader to change their mind, political events in the next few years, we may see the need to to analyze new data, to get smarter, to do something that big and that quick in the military space.” learn and to assess self-performance

If needed, Metal Shark is prepared to ? ll orders on short in real time is critical. We absolutely notice. Several years ago, it introduced its stock boat pro- gram, keeping an inventory of both completed and par- must get smarter every single day, and tially ? nished versions of its most popular models. “That in doing so, we must not be so attached is something that we continue to believe in, and we’re to our previous decisions that we are pushing hard to reduce lead times and increase stocking efforts,” Allard said. “And not just the small boats.” unwilling to make new ones. This can “We believe that the maritime market is somewhat be- be very hard, as it often requires ac- hind in only offering clients build-to-suit options, and we knowledging you were wrong, which is want to be able to give our clients solutions that are as close something that never feels good, but it as pre-constructed, buy-off-the-lot as possible. No design time, no lead time, no payment terms. Here’s the boat, is essential to leadership.” here’s the bill, put it in service and do the job. And I think www.marinelink.com MN 29|