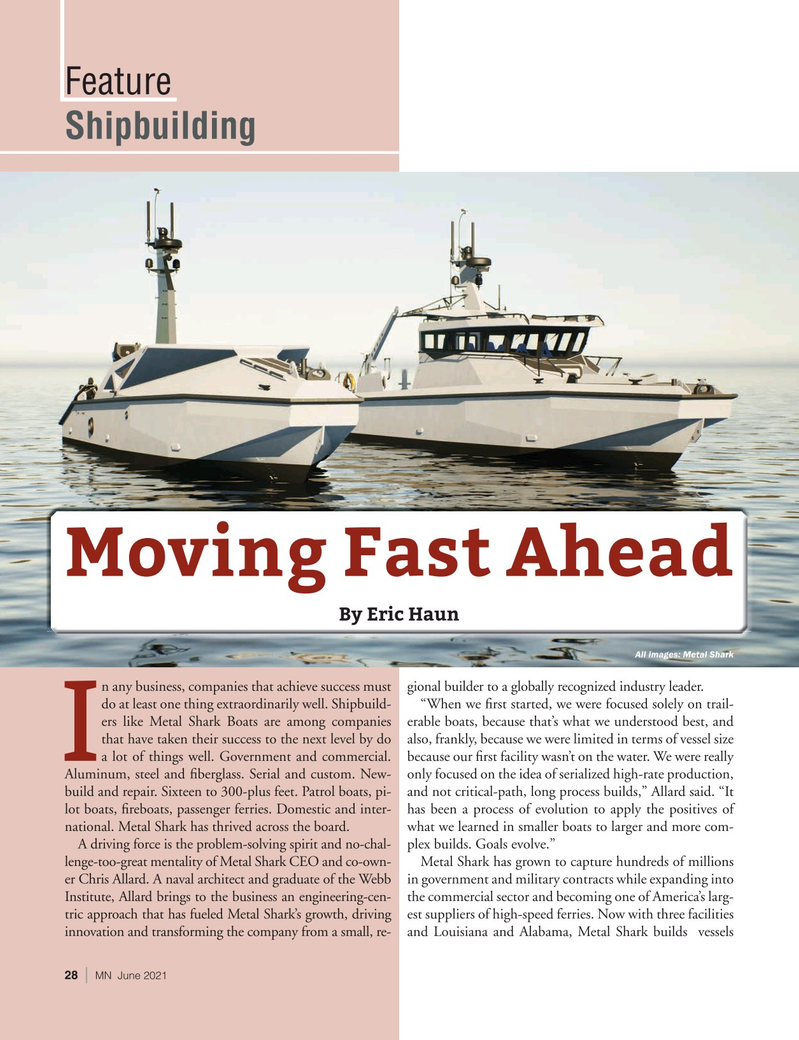 All images: Metal Shark n any business, companies that achieve success must gional builder to a globally recognized industry leader.

do at least one thing extraordinarily well. Shipbuild- “When we ? rst started, we were focused solely on trail- ers like Metal Shark Boats are among companies erable boats, because that’s what we understood best, and that have taken their success to the next level by do also, frankly, because we were limited in terms of vessel size a lot of things well. Government and commercial. because our ? rst facility wasn’t on the water. We were really

Aluminum, steel and ? berglass. Serial and custom. New- only focused on the idea of serialized high-rate production, build and repair. Sixteen to 300-plus feet. Patrol boats, pi- and not critical-path, long process builds,” Allard said. “It lot boats, ? reboats, passenger ferries. Domestic and inter- has been a process of evolution to apply the positives of national. Metal Shark has thrived across the board. what we learned in smaller boats to larger and more com-

A driving force is the problem-solving spirit and no-chal- plex builds. Goals evolve.” lenge-too-great mentality of Metal Shark CEO and co-own- Metal Shark has grown to capture hundreds of millions er Chris Allard. A naval architect and graduate of the Webb in government and military contracts while expanding into

Institute, Allard brings to the business an engineering-cen- the commercial sector and becoming one of America’s larg- tric approach that has fueled Metal Shark’s growth, driving est suppliers of high-speed ferries. Now with three facilities innovation and transforming the company from a small, re- and Louisiana and Alabama, Metal Shark builds vessels 28 | MN June 2021