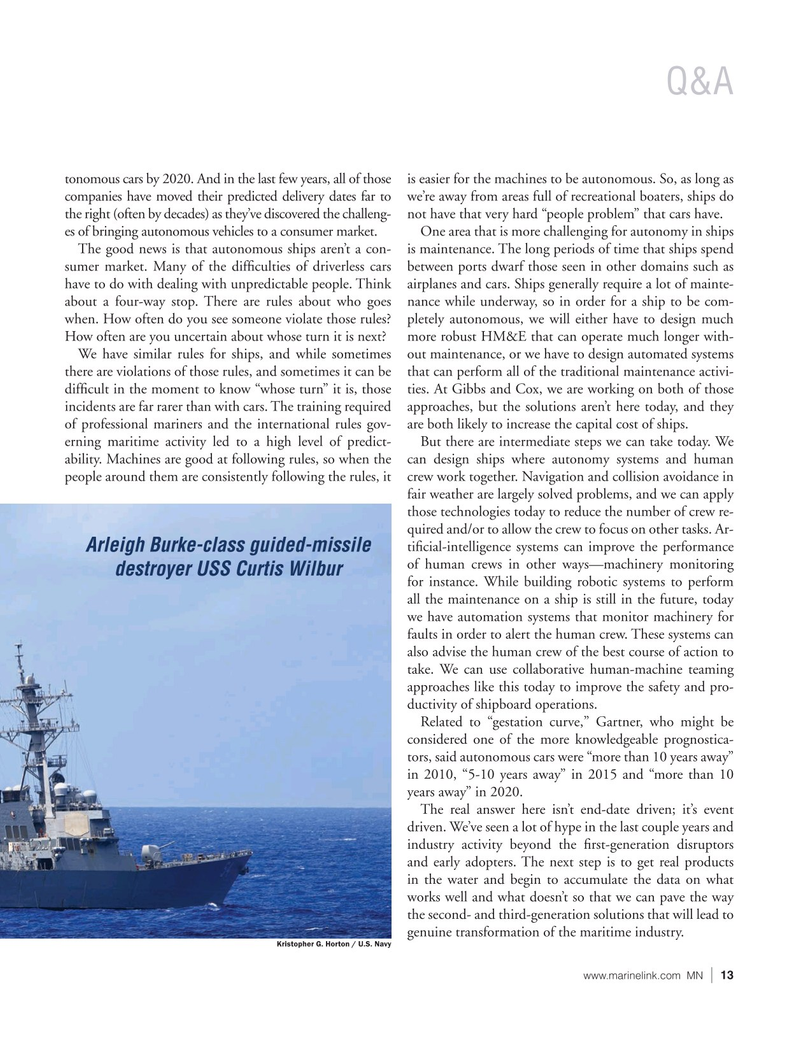 Q&A tonomous cars by 2020. And in the last few years, all of those is easier for the machines to be autonomous. So, as long as companies have moved their predicted delivery dates far to we’re away from areas full of recreational boaters, ships do the right (often by decades) as they’ve discovered the challeng- not have that very hard “people problem” that cars have.

es of bringing autonomous vehicles to a consumer market. One area that is more challenging for autonomy in ships

The good news is that autonomous ships aren’t a con- is maintenance. The long periods of time that ships spend sumer market. Many of the dif? culties of driverless cars between ports dwarf those seen in other domains such as have to do with dealing with unpredictable people. Think airplanes and cars. Ships generally require a lot of mainte- about a four-way stop. There are rules about who goes nance while underway, so in order for a ship to be com- when. How often do you see someone violate those rules? pletely autonomous, we will either have to design much

How often are you uncertain about whose turn it is next? more robust HM&E that can operate much longer with-

We have similar rules for ships, and while sometimes out maintenance, or we have to design automated systems there are violations of those rules, and sometimes it can be that can perform all of the traditional maintenance activi- dif? cult in the moment to know “whose turn” it is, those ties. At Gibbs and Cox, we are working on both of those incidents are far rarer than with cars. The training required approaches, but the solutions aren’t here today, and they of professional mariners and the international rules gov- are both likely to increase the capital cost of ships.

erning maritime activity led to a high level of predict- But there are intermediate steps we can take today. We ability. Machines are good at following rules, so when the can design ships where autonomy systems and human people around them are consistently following the rules, it crew work together. Navigation and collision avoidance in fair weather are largely solved problems, and we can apply those technologies today to reduce the number of crew re- quired and/or to allow the crew to focus on other tasks. Ar- ti? cial-intelligence systems can improve the performance

Arleigh Burke-class guided-missile of human crews in other ways—machinery monitoring destroyer USS Curtis Wilbur for instance. While building robotic systems to perform all the maintenance on a ship is still in the future, today we have automation systems that monitor machinery for faults in order to alert the human crew. These systems can also advise the human crew of the best course of action to take. We can use collaborative human-machine teaming approaches like this today to improve the safety and pro- ductivity of shipboard operations.

The real answer here isn’t end-date driven; it’s event driven. We’ve seen a lot of hype in the last couple years and industry activity beyond the ? rst-generation disruptors and early adopters. The next step is to get real products in the water and begin to accumulate the data on what works well and what doesn’t so that we can pave the way the second- and third-generation solutions that will lead to genuine transformation of the maritime industry.